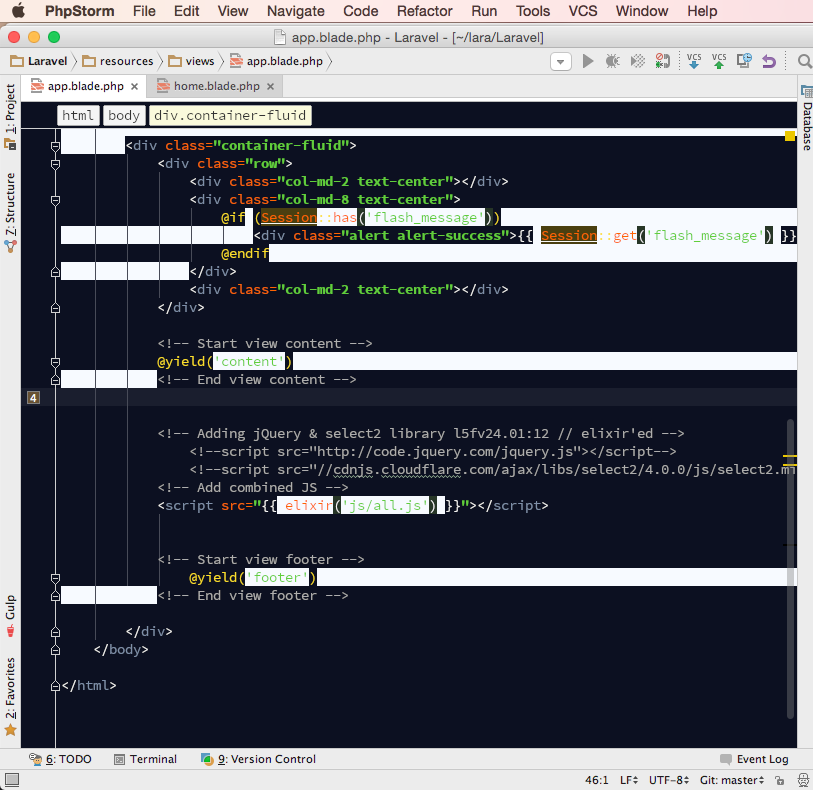 Please help me fix this?

I git cloned to the new mac (a Laravel 5.1 project), setup homestead, ok.

But PhpStorm highlights this code as if I've missed an ending semicolon. (see screenshot above - the below is the code that gets highlighted strangely).

This was not an issue on my old PC setup. AFAIK Laravel's @yield and @if @endif don't need a semicolon, based on this.

I've run this code for 4 months from my old PC without issues, and it runs normally on my Mac's Laravel Homestead installation.

1. exported and imported all settings from my old PC's phpstorm to the Mac - it imported my text colors but still highlights wrong on Mac.

2. downloaded the Laravel plugin and restarted phpstorm - no change

3. confirmed the blade plugin is activated in phpstorm

4. tested the same file on my old PC - no issues there in phpstorm 9.

What could be causing this highlighting? What have I missed?

Tinkered around and a solution:

On my Mac the background color was set incorrectly to white (inherited).

I then unchecked "Use Inherited Attributes" and set it to black. Problem fixed.

I don't know why this was set to white as on my PC it is set to black. I had done a phpstorm full settings export from pc, and imported to mac, using the generated settings.jar file so I can't say why this did not import properly. Don't know if something changed between versions 9.0 and 10.0 or whether it got skipped somehow during import.