How To Manage OAuth Flow In Mobile Application With Server

I am developing an Sports Mobile App with flutter (mobile client) that tracks it's users activity data. After tracking an activity (swimming, running, walking ...) it calls a REST API developed by me (with springboot) passing that activity data with a POST. Then, my user will be able to view the logs of his tracked activities calling the REST API with a GET.

As I know that my own tracking development isn't as good as Strava, Garmin, Huawei and so on ones, I want to let my app users to connect with their Strava, Garmin and so on accounts to get their activities data, so I need users to authorize my app to get that data using OAuth.

My first idea was to send those tokens to my backend app in order to store them in a database and develop a process that takes those tokens, consult resource servers, parses each resource server json response actifvities to my rest API activity model ones and store in my database. Then, if a resource owner consults its activities calling my Rest API, he would get a response with all the activities (the mobiles app tracked ones + Strava, Garmin, resource servers etc ones stores in my db).

I have discarded the option to do the call to the resource servers directly from my client and to my rest api when a user pushes a syncronize button and mapping those responses directly in my client because I need the data of those resource servers responses in the backend in order to implement a medal functionality. Further more, Strava, Garmin, etc have limits of usage and I don't want to let my resource owners the hability to push the button the times they want.

Here is the flow of my first idea:

To call the resource server:

As I don't want to hardcode my client secrets in my client because it is insafe and I want to store the tokens in my db, I dont see my first approach as a good option. Further more, I am creating a POST request to my REST API in order to store the access token and refresh token in my database and if i am not wrong, that process can be done directly from the backend.

I am in the situation that I have developed a public client (mobile app) that has hardcoded the client secrets because I can't figure how to avoid doing that when PKCE isn't allowed by the authorization server to get the tokens.

So after thinking on all those problems, my second idea is to take advantage of my REST API and do the call to the authorization server from there. So my client would be confidential and I would do the OAuth flow with a Server-side Application.

My idea is based on this image. 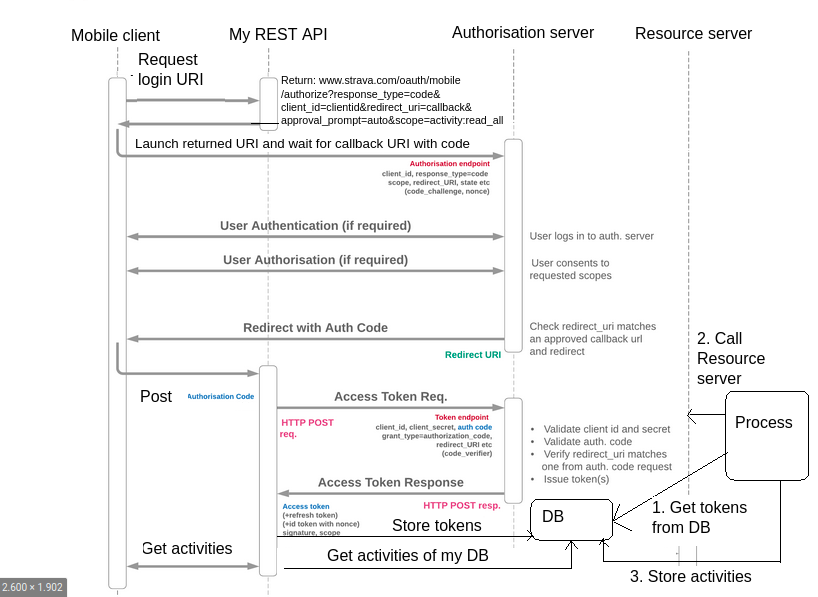 In order to avoid the client secret hardcoding in my mobile client, could the following code flow based on the image work and be safe to connect to Strava, Garmin, Polar....?

Is this second approach a good way to handle the client secrets in order to avoid making them public? Or I am doing something wrong? Whatr flow could I follow to do it in the right way? I am really stuck with this case, and as I am new to OAuth world I am overwhelmed with all the information I have read.

The second approach which you presented is a valid one to implement an OAuth flow. Your backend can act as the confidential client you need, and you can safely obtain tokens from Authorization Servers. This pattern is sometimes referred to as Backand-For-Frontend (though this name is a bit overloaded nowadays). At Curity we described something similar, which we call the Token Handler Pattern. The premise is similar, but our main target are Single Page Applications which can leverage cookies to manage sessions.

Of course the thing you need then is to create a secure session between your backend and the mobile app. In a browser app you would use just use plain old sessions with cookies. You have to make sure that noone can impersonate a user of your app when calling your backend.

Another thing you can explore is whether Stravia supports Dynamic Client Registration standard. Using DCR you can register each instance of your mobile app as a separate client. Then each of those clients receives their own client ID and secret. You then don't have to worry about the secret being stolen.

You can also reach out to Stravia and ask them why they don't support public clients with PKCE and whether they plan to do it. PKCE is an important security OAuth standard and companies should seek to support it.